You’re never too early for lunch…And never too late for breakfast.

The store (The Country Dream Building) was founded around 1850 and its first owner was Wheeler Roe, an uncle of the late Fred Garvey, and the one time president of the First National Bank of Warwick. It then passed down to Silas Young, LeGrande Mead and a Dr.Holly then later became Mead & Young.

Mr. Young was a venerable resident and a noted mineralogist known in this country and abroad. This collection is on display in the State education building in Albany. He made many valuable trades and exchanges of his spindles of Western and Foreign specimens. Young was the grandfather of Melvin G. Vernon, Warwick lawyer and Ralph Y. Vernon Middletown druggist.

Later the business was sold to Rev. W. R. Edwards, better known to townsmen as homminie Edwards, who toiled at the store six days a week and on the Sabbath was a faithful worker in the Sunday school and church on the hill. In this period were two important wagon making factories in Edenville. They were operated by Benjamin Colwell and Wallace J Dusinberre who boosted making buggies, wagons and sleighs to the highest grade.

In 1873 The Country Store was purchased by James W. Huston, Uncle of Miss Hutson who supplied much of the historical data. George S Everett, father of Seely Everett, took over the store in 1883 and the thriving business due to the Mount Adams Granite Company which supplied with a two horse wagon load of merchandise twice a week. The company employed about 180 men some of whom lived in the village other than three large boarding houses on premises. 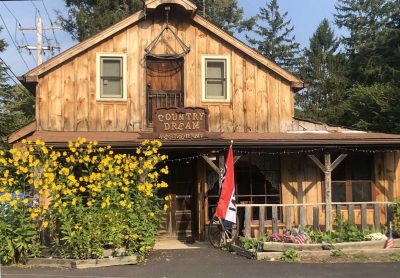 The mining concern was awarded a contract to supply the city of Brooklyn with 1 million Paving blocks of granite, a big order in those days since the advent of modern machinery. Seely Everett says his father often told the story of seeing the Hudson River from The Mountaintop before the scene was changed by buildings and overgrowth.

The business became the property of Marsh and Demaree in 1897 but the partnership lasted only a year. Mr Demaree sold out to Charles Sargeant and the country store became known as Marsh & Sergeant. Charles Sargeant became a resident of Middletown in 1955.

Seely S Everett acquired the store October 21st 1902 and operated for its longest term until it was bought by the Henderson brothers in 1968, who ran it for two years. Kenneth Henderson bought out his brothers share of the business. Kenneth sold vegetables out of the store for almost 25 years, then later remarrying after the passing of his first wife. Together Mr. and Mrs. Henderson have since established the Country Dream Restaurant which is in its 3rd decade of operation.

In 2010 the Hendersons sold the business to Marcelino and Maria Torres.

Take Out or Eat Here with Us

Call: 845-986-6600
No reservations needed. In a hurry for takeout? Please call ahead and we’ll have it ready for you upon arrival!

FAMILY RUN AND OPERATED RESTAURANT
We take pride in serving only the best ingredients to our neighbors and guests in our establishment.

Pull up a chair. Take a taste. Come join us.

Homemade Mexican specialties, with just the right amount of spices for accenting a culinary delight! Try our poblano soup or our many Mexican specials like grilled skirt streak with a poblano relish, specialty tacos, and homemade pico de Gallo! Bring your friends and family for some authentic Mexican food.